Beyond the result, SL Benfica in Moreira de Cónegos 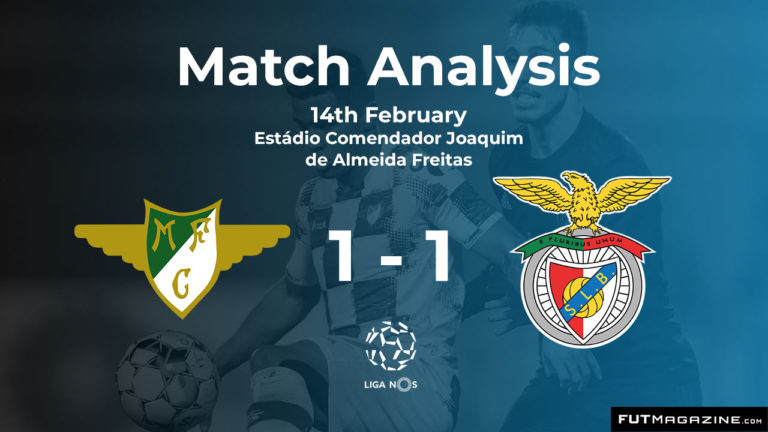 SL Benfica demonstrated quality in their behaviour in positional attack at many moments and against a Moreirense who had no bad behaviour declared in his 5x4x1 in Medium Block, where they were predominantly. SL Benfica’s offensive position game, in its construction at “3+1” or even without the DM fitting when building at “2+1+1” or “4+1+1” depending on the projection of the FBs, usually more projected from the 2nd to the 3rd phase, it raised tremendous difficulties for Moreirense, mainly to prevent the breakdown of the defensive structure from the inside. And in fact, against the 5x4x1 in Medium/Medium-Low Block, the problems that Benfica raises in this context are not new.

SL Benfica in this scenario always manages to raise tremendous difficulties and uncertainty to the opponents inside. Forwards constantly fix 3 CBs (and they shorten inside the opponent´s wing, there is discomfort because ST threatens to conquer the space-zone), Wingers on the inside to be connect the windows between opponent’s Wingers-CMs, DM or CM doing the “+1” which creates an advantage inside 3×2 – if DM does not go down to the line of 3 they can project more the CM and make diamonds inside creating 4×2 advantages. In fact, even with a line of 3, this 4×2 can be created if one of the Forwards had a trait to play between the lines (EX: Waldschmidt). And even if the opponent is with Wingers too inside, solution to call outside to go inside, with a Forward on the side of the ball trying to fix the CB of the width and create space inside for the wing to receive. However, it is not only important to set up the positional game to create the advantages. It is essential to understand how to connect in these advantages and even in that (where most teams fail) SL Benfica was competent, discovering the dynamics/solution to break the inside structure or call outside to go in – especially through the right wing, due to Moreirense’s Winger and LB fault that jumped from the outside to the inside frequently in the CB. Vertonghen, naturally conditioning the Benfica game a little more for Connections of 1st and 2nd Phase in the CB, Otamendi, and the RB, Diogo Gonçalves.

The main problem with Benfica was related to their difficulties in Phase 3 and in the definition, and, of course, a consequent finishing. From the moment that the connections from the 2nd to the 3rd Phase took place with the dynamics and in the spaces spoken, that you will be able to see on video, there was always a lack of players with greater capabilities to receive from the inside to progress/create advantages/define (only Everton will have this profile type) and elements of the offensive line that understand the game in the breaking timings, way of “breaking”, support/break dynamics dismantling the last line.

Observe and analyze the standard spaces and breaking solution of Moreirense’s defensive structure from the inside, as well as some dynamics used by SL Benfica to connect in these advantages

In addition to these, there are other 3rd phase solutions and dynamics that could have been explored.

Problems for Moreirense in the 1st half with too many long connections from the 1st Phase with an open team.

SL Benfica stronger in the duels and first/second balls, recovering the ball with the opponent very open with distant lines, which led to situations of 3×3 against the Moreirense’s CBs (creating advantage and even numerical superiorities for moments). SL Benfica has created some of the most obvious opportunities to score here, including the goal in this dynamic. For the 2nd half, Moreirense adjusted and ended up, when making long calls, having a shorter team in the field, not allowing this type of advantages.

Stay with the video of this important game standard.

At SL Benfica, we can identify the constant pursuit for the man, individually, with success, despite the fact that there were two connections inside, one from the Winger, Yan, and another from the Forward, Walterson.

In Defensive Transition, for 75 minutes, the behaviours, both in the center of the game and outside the center, were very competent, allowing Benfica to be constantly with the ball. In the last 15 minutes, the greatest fatigue, especially physical, in this match, led Moreirense to get out of his first moment of Offensive Transition more easily and even to finish.