A “weird” match at Estádio do Dragão 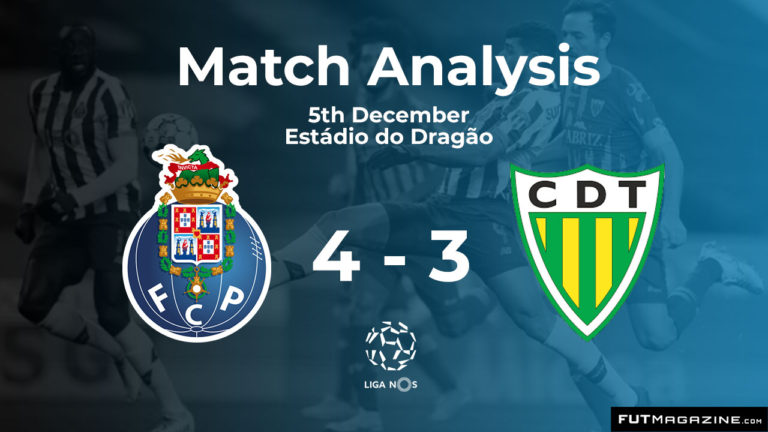 In this match, FC Porto displayed competent behaviours when in Offensive Organization, especially until the 65th minute. We highlight FC Porto’s behaviours, trying to have a lot of players high up the pitch in offensive positions (the CM Sérgio Oliveira was mainly positioned high up the pitch so as to create advantages) to break the opponent’s last line – this was the team’s best offensive dynamic.

Given CD Tondela’s 5x3x2, Porto should have explored these spaces after attracting the opponents, essentially from the left wing, to get the 3×2/2×1 advantages on the opposite side of the pitch.

Moment of the game where Porto displayed some weaknesses in its behaviours, especially away from the centre of the game (balance). The players were positioned high up the pitch and the team was playing wide (the CM Sérgio Oliveira was positioned high up the pitch; the winger Otávio was positioned lower on the pitch, but playing too wide to build; the CM Uribe was playing both in the inner space and in the width on the left side). FC Porto failed to achieve balance with the advantages, which exposed the CBs lower positioning on the pitch. With that, the CBs approached the opponent’s offensive references late (when they should cut the depth and control the inner space). It’s possible to have a lot of players positioned higher up the pitch and still achieve a balance between all sectors. Here are some of the behaviours where FC Porto displayed more weaknesses.

In this moment, FC Porto’s was less competent in protecting the space between the Centre Back and the Full-Back (on the right wing). As a consequence, the defending champions ended up conceding two goals. The 1st play is after setting a tactical formation, but the scenario that comes out of that moment gets easily into Defensive Organization. The 2nd play is after losing possession, but with the team already in organization and after re-establishing the lines.

This was a match without any relevant or interesting free-kicks which isn’t normal for Sérgio Conceição’s team. FC Porto is still trying to reinvent itself to be very strong in this “moment” again. So, here’s a somewhat creative free-kick from FC Porto against CD Tondela.