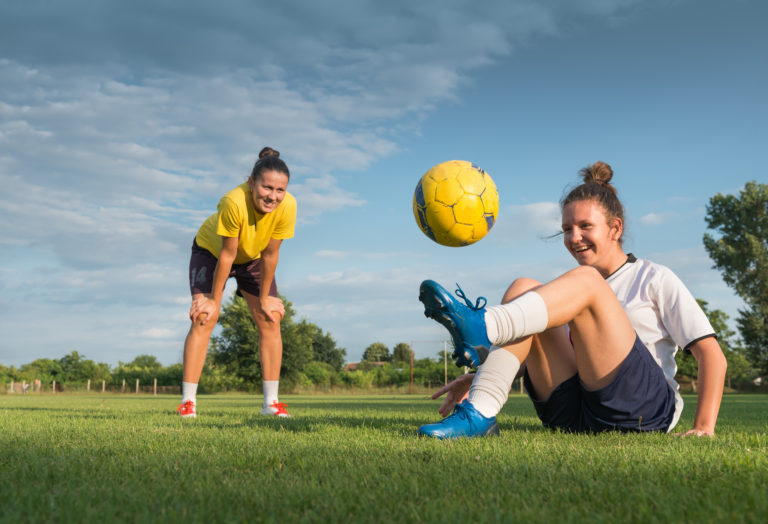 The growth of women’s football in Portugal has been remarkable in recent years. The number of professionals involved in women’s football has increased with the creation of competitions and the emergence of new teams. We are still in the early stages, but opportunities for football professionals are becoming clearer and more frequent.

The actuality of women’s soccer

In March 2016, the Portuguese Football Federation (FPF) invited the 18 clubs that constituted the NOS League in the 2015/2016 season to create women’s football teams for the 2016/2017 season. After the legal process, SC Braga, Sporting CP, CF “Os Belenenses” and Estoril Praia were the clubs that accepted the invitation. To join the Allianz League, 2016/2017 National Women’s Football Championship name, clubs had only to assure two conditions required by the FPF: keep the team for a minimum of three seasons and assemble, in a three years period, a female under-19 team. Unfortunately, not all clubs have met these conditions.

The FPF measure was a great incentive to the development of the sport, witnessed by the growing number of federated players and their increasing visibility. Since the entry of these clubs in women’s competitions in 2016/20017 the number of practitioners (junior and senior) has increased by 81% (between 2015/2016 until 2018/2019 seasons), according to FPF [1] data (graph 1). It is important to note that the largest percentage increase happened in the transition from the 2015/2016 to the 2016/2017 season following by the announcement of the four major clubs entry into the new women’s football league. This increase in the number of female players would certainly be much more pronounced if data on youth categories were added.

In 2015/2016, before the entry of these clubs in the women’s football scene, Portuguese Cup final played between Futebol Benfica and Valadares which ended with a victory of the former, had the assistance of 2500 people in the stands [2]. That number increased 389% (12213) the following season, in a game between SC Braga and Sporting CP where the first team won on the extra time. Last season SL Benfica was present at the final and the numbers were even higher reaching a 405% increase.

Through this number, there will be no doubt that women’s football in Portugal is growing significantly.

Through these data, it is possible to verify a significant difference between the number of female and male coaches in female football competitions.

Internationally, looking at the 2019 World Cup in France, although the numbers are not so different, there is still a dominance of male coaches in women’s football competitions. In the 24 participating teams [3], the competition included 9 female coaches and 15 male coaches (38% of female coaches).

This distribution can be partially justified by the relation between the competition regulation demands and the number of women’s coaching license. In the FPF competition regulations [4], it is possible to observe the necessity of a UEFA B license to work as a head coach in the 1st Division Women’s Football Championship. However, the UEFA C license, the minimum coach qualification, is enough for a head coach who participate in the 2nd Division Women’s Football Championship and in the Under 19 National Championship. According to with the Graph 3 which shows the number of female coaches (football and futsal) and their license level in Portugal in 2019 (IPDJ/Training and Qualification Department), it is possible to predict a greater presence of women involved in female championships.

The integration of female coaches into technical staff teams may be justified by the existent differences (both physical and psychological) between female and male coaching necessities and methodology. The age difference related to the begin of football education can be one of the reasons this female coaches integration is not visible yet.

Do career-ending female players think of being coaches? Doesn’t that happen because women still feeling the amateurism of women’s football and don’t see coaching as a profitable career?

The FPF strong focus on women’s football, as well as the creation of more women’s football competitions such as Under 13 National Women’s Cup, Under 14 National Mixed Cup and Under 15 National Women’s Cup allows an increase in both the number of federated players and teams. The creation of new teams increases the number of professionals required to perform certain functions, such as head coach and assistant coach. These positions, with quality offerings (as shown um graph 3) may be held by female professionals. Quality must always overlap the gender, so it would be interesting to understand if women’s can present knowledge and operationalization levels to lead female and male teams as already happens.

The recent FPF clubs certification process, which until now was only intended for men’s football and futsal will also be extended to women’s sport in 2019/2020. The FPF has revealed that in 2020/2021 season, to have a 5 stars evaluation the clubs must have a female team or at least 20 female registered players [5]. In the near future, it is interesting to see how the clubs with no women’s teams which obtained a 5 stars evaluation, such as Clube Desportivo Nacional, Clube Desportivo das Aves and Futebol Clube do Porto, will adapt their structure. To maintain the excellence rating these clubs could opt by the creation of women’s football teams increasing job opportunities for the football professionals in all the training areas such as head and assistant coaches, physiologists, fitness coaches, analysts and prospectors.