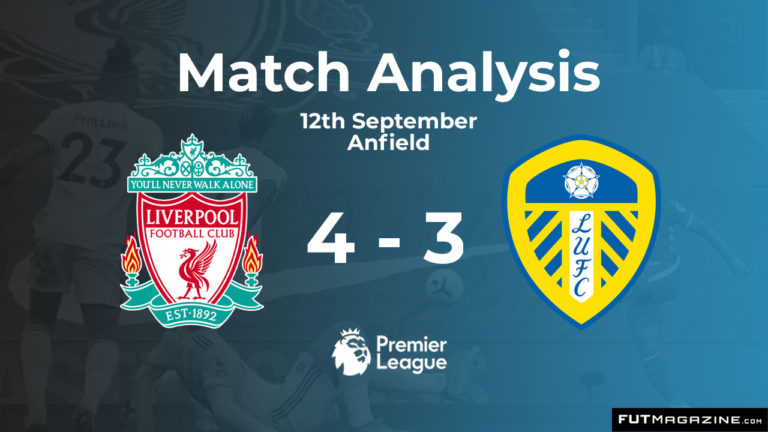 The Offensive Organization in the 1st and 2nd Phases of the build-up with a line formation of “4+1” vs. Liverpool’s 4x3x3. Leeds showed patience building up from the back, circulating the ball between the Goalkeeper, Center Backs and Central Midfielders, attracting the opponent’s second line of pressure (midfield line), and increasing the probability of success in creating the 5×4 against Liverpool’s defensive line.

They played with Central Midfielders high up the pitch, occupying the spaces between the center backs and full-backs, wide and deep wingers, especially on the blind side of the second Centre Back, increasing the intrasectoral spaces of the opponent’s last defensive line. Leeds tried to (and successfully) produce long passes to the left winger creating a 1×1 or even a break, with the possibility of dismantling Liverpool’s last line due to weak Centre Back approaches on the right side (Joe Gomez) over the opponent’s left Central Midfielder… Creating space for a run of the striker on the blind side, with the dragging of the second Centre Back out of position. In this case, the open winger may fix the opponent Full-back so that the Central Midfielder can break the second line between the Full-back and the Centre Back on the opposite side. If the Full-back closes in, the winger will remain as an unmarked player (looking for the 2×1 or the break from the outside in). Given the opponent’s formation, it seems practical to accelerate the game at the right time, if it attracts the pressure form the opponents’ CM to Leeds’ CM, allowing him to adjust his positioning and protect the last line if necessary (for example, if the Centre Back approach on the outside).

Another interesting situation is when there is the build-up on the outside, in other words, with a lower Fullback, the approach on the outside of the opponent’s Central Midfielder will be big allowing moments with the ball free of any pressure to create superiorities. In this last scenario, the opponent’s Central Midfielder will have to adjust, gaining more individual reference by pressing the Leeds Central Midfielder, which is closer to the ball. If the Centre Back leaves the interior space, he has to adjust the line, which never happened and allowed Leeds to be superior, especially on the left offensive side, Liverpool’s right side, where Joe Gomez’s lesser capacity for interpretation and limitations, compared to Van Dijk, were noticed throughout the game.