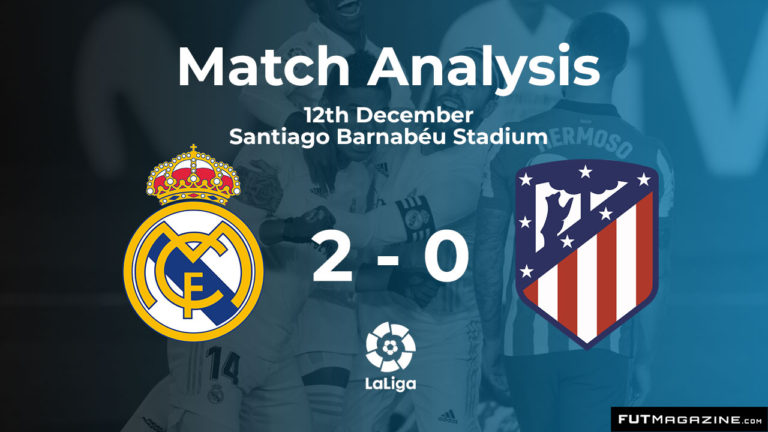 The match had two completely different halves. In the 1st half, Real Madrid was clearly better, mainly when in possession. In the 2nd half, it was more even and Real Madrid’s weaknesses without possession were exposed, although Atlético failed to take advantage of those situations.

Real Madrid was far superior, more dominating and controlling with the ball. Atlético was not able to create opportunities with his 5x3x2, they proved to be patient while defending with high and pressing lines.  Not even in Offensive Transition did Atlético manage to do anything against this Real Madrid, having only left the pressure zone twice with quality but without being able to finish with quality.

The spaces that Atlético allowed Real Madrid to explore (in 5x3x2): the opposite side of the pitch by looking for the 4×3 macro so as to create 3×2/2X1 advantages after attracting the opponent from the left wing in the transition from the 2nd to the 3rd Offensive Phase. Real Madrid sought to explore these spaces, that are frequently opened when playing in a 5x3x2, however, Real lacked the positioning to create the 4×3 Macro so as to break Atlético de Madrid’s defensive structure. That happened because the CM, Modric, and the Right Fullback, Carvajal, occupied the same spaces and no one tried to hold the CM on that side. The dynamics adopted to win this space weren’t conscious. The solutions found by the CM Kroos, in the width, from the left side to get the ball to the opposite side (which happened more in Offensive Organization), or by the left fullback Mendy playing lower on the pitch, without the CM  Kroos in the build-up, needed to be foreseen.

Positional attack of the Real starting predominantly from the left wing (with the presence of the CB, Sérgio Ramos, and the CM, Kroos, in the build-up justify this behaviour).  From this situation Real could have created advantages from the outside/breaking the last line by taking advantage of the behaviours of the opponent CM, Llorente, that was always attracted by the pressure and of the right fullback, Trippier, who doesn’t keep his position on the inside for too long. As so, the 2×1 advantage from the outside could have been created several times, or if the right centre back adjusted to a 2×2 there would be space between the right fullback, Savic, and the CB, Felipe, who was playing too much on the inside (and wrongly) often leaving the space in the width that the DM, Herrera, had to control.

Still during the 1st half, Atlético started to defend in a 4x4x2 and so the spaces mentioned above would be even more evident. Atlético started to struggle with the control of the left wing, caused by that change in the structure, given the rise of 2×1 advantages from the outside and the space that was opened between the CB and the Fullback because the CB, Felipe, kept playing on the inside. The change may have occurred because Simeone’s technical staff wanted the team to be closer together to approach in a constant and aggressive way and apply more pressure, which was what Atlético did in the 2nd half.

Despite the ball possession and dominance, the truth is that the spaces and the weakest behaviours/principles of Real Madrid remain clear.

The match was more divided, having lost quality of behaviours, and this scenario benefited Atlético more than Real.

Mention should be made of adjustments and substitutions at the halftime by Simione’s technical staff, defending in a 4x4x2 (as in the last 15 minutes of the 1st half) but attacking on a 4x2x3x1 (initially with Lemar as OM and João Félix as an inside left winger) looking to invert the scenario of an Athletic with lack of ability to press and lack of competent behaviours without ball at the level of what the Coach demands – at the end of the match, Simeone admitted that he was wrong in choosing the starting 11 and the structure for this match.

In the 2nd half, Real mainly in Defensive Organization with less competent behaviours: Incredibly low DM; Lucas Vasquez, as a winger, joining the defensive line in width (forming a line of 5 and 6 by individual reference); the CB, Sergio Ramos, shortening inside in an exaggerated way. Analysis of these behaviours and how Atletico could have created more superiorities.

3 set pieces (2 corners and 1 lateral free kick) where Real Madrid managed to create unusual difficulties for Atlético’s team, having even successfully finished twice and still managed another finish after creating advantages from a rehearsed corner.