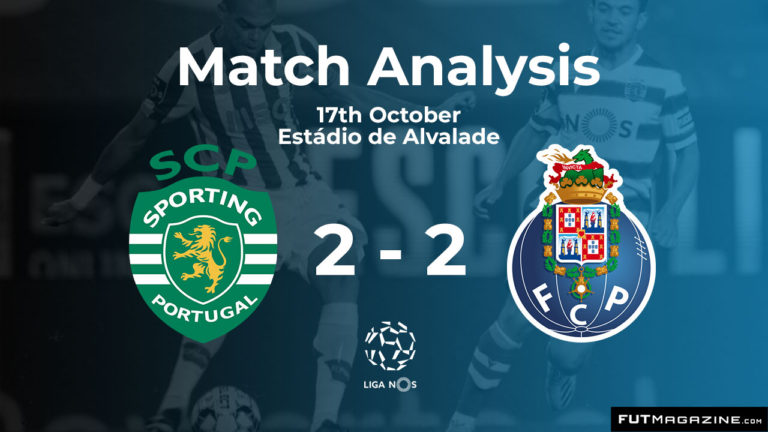 In the 1st half both teams divided the game and we already saw, during the first half, a FC Porto that demonstrated some difficulties in creating advantages or in connecting their game (either in a supported or long way), when in Offensive Organization. The champions focused their efforts by connecting their 1st phase of the build-up, mainly through the goalkeeper (Marchesín), with a long ball directed to their main striker (Marega) that also aimed for the possible advantage situation created in his space (2×1/3×2) – both actions had little success due to the goalkeeper’s poor executions and their difficulties in perceiving the spaces, movements and timings.

The striker (Marega) displayed an interesting positioning, regularly holding the CB from the width of Sporting’s defensive line of 5, managing to create advantages in a 2×1 situation to control the depth or search for Half-Spaces in a more supported way. By breaking Sporting’s line of pressure through the Pivot (Sérgio Oliveira), FC Porto managed to have some success while in Offensive Organization.

In the 2nd half, the champions played mostly in their Defensive Organization, initially positioning themselves in a middle block, changing to a lower block over the course of the game – playing with a defensive line of 5 and 6, with deep fullbacks as individual references – which turned the counterattack into a difficult move to execute. When FC Porto pressured, it was mainly on the outside by Corona rather than by Luis Díaz.

The Offensive Transition turned out to be the best moment of the game for both teams, with FC Porto getting more success from it in the 1st half (their best moments were when they managed to create a 1×2 on the counterattack) rather than in the 2nd half (their positioning in a lower block and their defensive lines of 6 conditioned the fullbacks’ offensive movements)

Regarding the tactical formations, FC Porto is still creating difficulties, offensively, even after losing two of their main references in the build-up (Alex Telles and Danilo). However, they showed some permeability while positioned defensively for some throw-ins (the opponent managed to create an obvious finishing chance and score a goal).