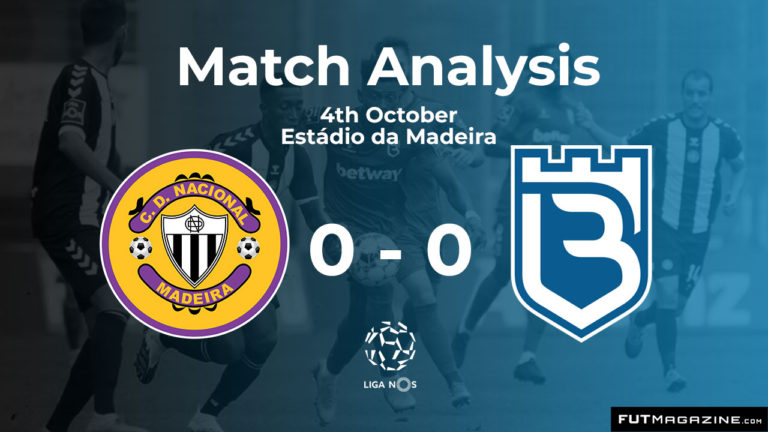 We analyse the teams of two managers with different profiles. Both of them have been fulfilling the goals that were proposed to them at the start of their projects that have, nonetheless, different backgrounds.

On the one hand we have Luís Freire, a coach that has promoted several clubs, managing a Nacional da Madeira with a game plan suited to his image, trying to be a team with the ability to hold possession for the majority of the game. On the other hand, we have Petit, a coach who in recent seasons has been the chosen leader for teams in tough situations, having succeeded in reversing the results of those teams, saving them from “tight” situations, such as relegation, and managing to end up achieving the proposed goals. A coach focuses mainly on organizing the team defensively to deny opponent’s goal opportunities. Whereas during the offensive moments of the game, the coach focus on forcing the opponent’s team error, quick attacks or transitional moments.

In order to implement their game plan, one of the most important game variables is the chosen player profile to directly put the coach’s ideas into practice.

They play with a defensive line of 3 + 1 with the sweeper joining the first line of the build-up (positioning himself mostly between the CBs) and with a centre midfielder in front of those 3 players (Rúben Micael).

With that formation, a 3-4-3, they project the 2 fullbacks on the outside after the ball goes to the midfielders (the right and left midfielders are positioned in the central area between the centre back and the full backs, João Camacho and Vicent Thill, and they also position Vicent Koziello behind the forward).

Characteristics of the attacking midfielder: he must have a greater technical-tactical dimension than a physical one.

Characteristics of the right and left midfielders: they must have greater technical attributes in order to be able to play in smaller spaces and under pressure.

Predominant idea in the offensive moment:  they try to explore the spaces available in the back of the opponent’s midfield line to be able to play in the central areas of the pitch, in order to attract the opponent’s defensive line.

They play with a defensive line of 3 + 2 with 3 CBs in the first line of the build-up, with 2 CMs in front of that line (Cauê and Afonso Taira).

With that formation, they project the 2 fullbacks on the outside (they strategically explored constantly the left wing, thus creating most of the attacking efforts in that wing).

Characteristics of the CMs: Cauê with a greater physical dimension rather than a technical one.

Characteristics of the right and left midfielders: players with greater physical attributes essentially due to speed being a strong point when it comes to attack depth (both in the organizational moment and in situations of a fast break attack).

Predominant idea of the offensive moment: the team tries to build-up essentially through the wings, attracting the opponent’s fullbacks and creating break-ins between the centre back and the fullback or trying to open space on the outside in order to uncover the ball for the cross.