Macro analysis to the current league champion at Bessa 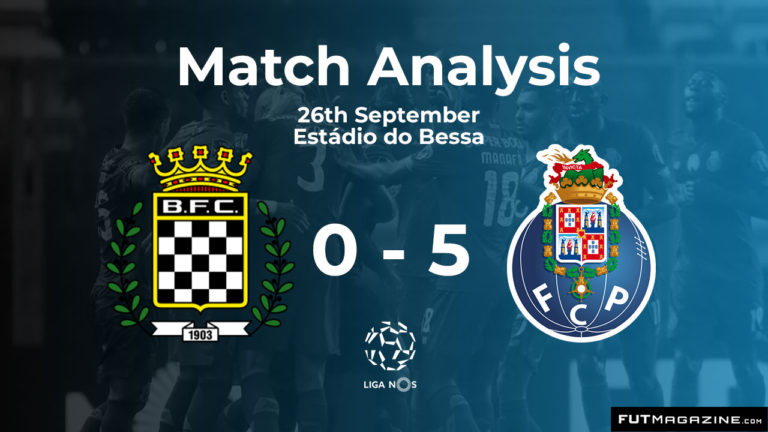 In the Defensive Goal Kick we could see an FCP trying topress and recover the ball in areas high up the pitch. Despite a large percentage of success (because they are very aggressive in the approach and superior in the duels), it was noticeable the existence of spaces that the opponent could have taken advantage of.

The Champion’s competence in this particular matter wasn’t surprising. They mainly sought to position themselves in a Medium/High Block and restrain to be able to press. A highlight note for Corona’s defensive positioning – high up the pitch – seeking to restrain Boavista’s 1st phase of the build up to the opposite wing and to counteract Angel Gomez’s intention of lowering down the pitch to start the build-up. Sometimes it was possible to spot some individual reference in the control of the wings on Porto’s left side, as well as some approaches (inside and outside). Boavista’s game turned out to be very focused in the search of in depth connections with the FW, with inside out movements or diagonal movements.

In the two offensive goal kicks, it was noticeable the intention to play short, with the line of 3 already set up with Danilo as a Sweeper, between the CBs. They tried to shake off the pressure with a more supported link inside, with the winger, and a deeper connection in the Offensive Reference, building-up from there. Whenever the pressure struck, the link between Corona and Marega arose, with the winger always trying to look for the break from the forward.

FCP proved to be competent and showed some interesting actions, above all, difficult to counter, such as arriving to the finishing areas with a lot of players where, when crossing, FCP is very dangerous, or by requesting the break through of the forward from the inside out.

In this game, with Danilo building a line of 3 or always close to it, Porto looked for the outside link in the left wing as well as “calming down the pace” to seek the opposite space: either with inside links between the opponent’s Central Midfielder and winger or by circulating the ball in order to accelerate to the outside into the right wing where they would “break” the control of the opponent’s wings and could dismantle Boavista’s defensive line by threatening the depth or space-goal.

Advantages of accelerating in the right wing.

Solutions to connect through breaking movements and an effective connection to the “inside”, breaking the opponent’s defensive structure.

Corona’s defensive position during this game positively influenced Porto’s offensive transition moment. They were an aggressive team looking for the counter-attack and ensuring advantages, which bring them closer to success.

The “Moment of the Game” where Porto is really different, for two clear reasons: their quality of execution and players with relevant individual characteristics to finish. They’re usually strong in the “direct” connection to the area either with a free kick on the side or with a corner kick, but in this game the real difference was made in the indirect connection (by trying to dismantle the opponent’s zonal defense) and by winning the second ball.